There is a fascinating article by W. Rocky Newman and John R. Bowblis that shows up in The Conversation; I hope that it gets picked up for wider distribution.  The piece, entitled, “Crash in oil prices will hurt the U.S. economy from Texas to Wall Street,” argues that drops in the price of energy, while good for consumers, also has unintended consequences for the wider economy: oil companies, banks, and other companies that work in energy markets will see an immediate downtown.  Even those firms that purchased oil and gas futures to hedge against lower energy prices will eventually suffer. So although consumers in the urban east might find lower energy prices to be a windfall for their disposable income, there could be a cascading negative effect on the portion of the American economy that has hard-wired high energy prices into their business model. 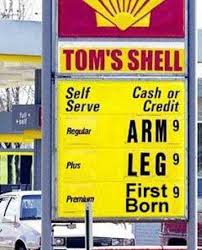 I’ve written and lectured about the impact that cheap and abundant energy resources has had on American history; not all of the consequences are positive.  When the energy crisis hit the United States in the 1970s, Americans were absolutely unprepared for the rationing that resulted, either in terms of high prices,  or at the height of the crisis, actual rationing based on licence plate numbers determining whether you could fill up on odd or even calendar days.  If you go back further, Americans considered cheap coal such an entitlement that President Roosevelt led an unprecedented federal intervention in the Great Anthracite Strike of 1902 in order to restore the flow of inexpensive heating fuel into cities.  Once consumers become accustomed to cheap energy, a sudden change of fortune has an immediate economic, and perhaps more importantly, political, impact.

Those oil and gas producers in the West will find little comfort in the notion that they have reaped the benefits of relatively expensive energy for a few decades; nor will they relish the notion that cheap and abundant energy–the standard for the American economy for the vast majority of its history–might become the new normal.

I'm the Hyatt and Cici Brown Professor of History at the University of Florida. At UF, I teach courses on the Early American Republic and the History of American Capitalism. I've published books and articles on the history of the coal trade, and recently completed a book that examines the origins of America's fossil fuel dependency in the 19th century.
View all posts by Sean Adams →
This entry was posted in economy, Energy. Bookmark the permalink.