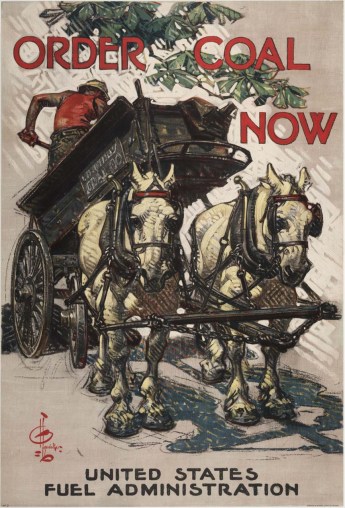 I had the honor of contributing to the US World War I Centennial Commission’s Weekly Podcast today, where I tried to get folks up to speed on the state of the American coal industry in December 1917.  Whether or not I was successful in that venture is up for debate, but it did force me to review the fascinating story of the United States Fuel Administration, and its overwhelmed leader, Harry Garfield.

The USFA was created in September of 1917 and charged with a pretty monumental task: straightening out the nation’s byzantine fuel distribution network.  Americans had no problem raising coal in the World War I years–the industry opened up over 1,300 new mines from 1917-18. But getting it to industrial and residential consumers was an altogether different story.  As it turns out, railroads liked to turn a profit, and although many manufacturers signed contracts for coal delivery, the managers of coal-carrying railroads were more inclined to send full cars to the highest bidder.  In many cases, coal accumulated at the mine mouth for want of transportation, only for mine operators to learn their coal cars had been dispatched elsewhere.  By December 1917 this problem was chronic, and despite the USFA’s plea to consumers to purchase their winter’s supply of fuel in the warm months–hence their beautiful posters that demanded folks to “Order Coal Now” and that “Uncle Sam Needs that Extra Shovelful.” 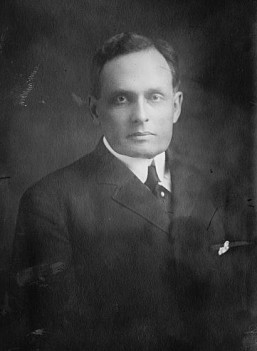 Harry Garfield, looking glum.  This is probably right after he issued the Closing Order

Into the breach stepped Harry Garfield, the president of Williams College and a rather naive believer in the ability of government agencies to effect positive change in the marketplace.  Garfield knew the law and academia, but he didn’t really know the coal trade, which became obvious when he engaged in a program of price fixing–never popular among consumers–and the Closing Order of 1918 that created “idle Mondays,” effectively shutting industry down for four days in January 1918 and then one day a week until March.  Harry was the son of  President James Garfield, who was tragically assassinated, so he was hardly a dewy eyed novice to politics, but he never anticipated how vicious consumers of coal could be when deprived of fuel.  “The order itself inflicts a profound mortification on the American people, which in my judgement, they will not forget for a long time,” Harvard’s president Charles W. Eliot declared.  “No one of the belligerent nations in Europe, except Russia, has been forced to admit such incompetence in public administration.”  Besides not adhering to the honor code among college presidents, Eliot summarized what many other Americans thought about the USFA’s “idle Mondays”:  the only thing worse could be a Bolshevik Revolution.

Luckily, the USFA closed its doors soon after the end of the war, and Garfield returned to the more calm halls of academia–although I suspect he and Eliot didn’t socialize much at the annual college president’s banquet.  The sad thing about this decision is that it wasn’t the miners, the managers, or the retailers in the coal industry that were to blame for the fuel shortages that Garfield tried to address; it was the railroads.  So once the United States Railway Administration effectively nationalized them, the shortages were mitigated.

I’ve written quite a bit in Home Fires about the suspicion, fear and loathing that American consumers had for the major actors in the coal trade, even as they found themselves utterly dependent upon them for fuel.  Sorry to say that Harry Garfield got himself mixed up in the hate; if only he knew what he was getting into in 1917!

I'm the Hyatt and Cici Brown Professor of History at the University of Florida. At UF, I teach courses on the Early American Republic and the History of American Capitalism. I've published books and articles on the history of the coal trade, and recently completed a book that examines the origins of America's fossil fuel dependency in the 19th century.
View all posts by Sean Adams →
This entry was posted in Uncategorized. Bookmark the permalink.